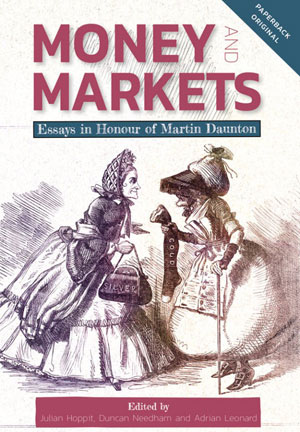 Money and Markets – Essays in Honour of Martin Daunton

This book explores the changing boundaries and relationships between market and state from the seventeenth to the twentieth century.

Money and Markets celebrates Martin Daunton’s distinguished career by bringing together essays from leading economic, social and cultural historians, many being colleagues and former students. Throughout his career, Daunton has focused on the relationship between structure and agency, how institutional structures create capacities and path dependencies, and how institutions are themselves shaped by agency and contingency – what Braudel referred to as ‘turning the hour glass twice’.

This volume reflects that focus, combining new research on the financing of the British fiscal-military state before and during the Napoleonic wars, its property institutions, and the longer-term economic consequences of Sir Robert Peel. There are also chapters on the birth of the Eurodollar market, Conservative fiscal policy from the 1960s to the 1980s, the impact of neoliberalism on welfare policy and more broadly, the failed attempt to build an airport in the Thames Estuary in the 1970s, and the political economy of time in Britain since 1945. While much of the focus is on Britain, and British finance in a global economy, the volume also reflects Daunton’s more recent study of international political economy with essays on the French contribution to nineteenth-century globalization, Prussian state finances at the time of the 1848 revolution, Imperial German monetary policy, the role of international charity in the mixed economy of welfare and neoliberal governance, and the material politics of energy consumption from the 1930s to the 1960s.

ADRIAN LEONARD is Associate Director of the Centre for Financial History at the University of Cambridge.

DUNCAN NEEDHAM is Dean and Senior Tutor at Darwin College, University of Cambridge.